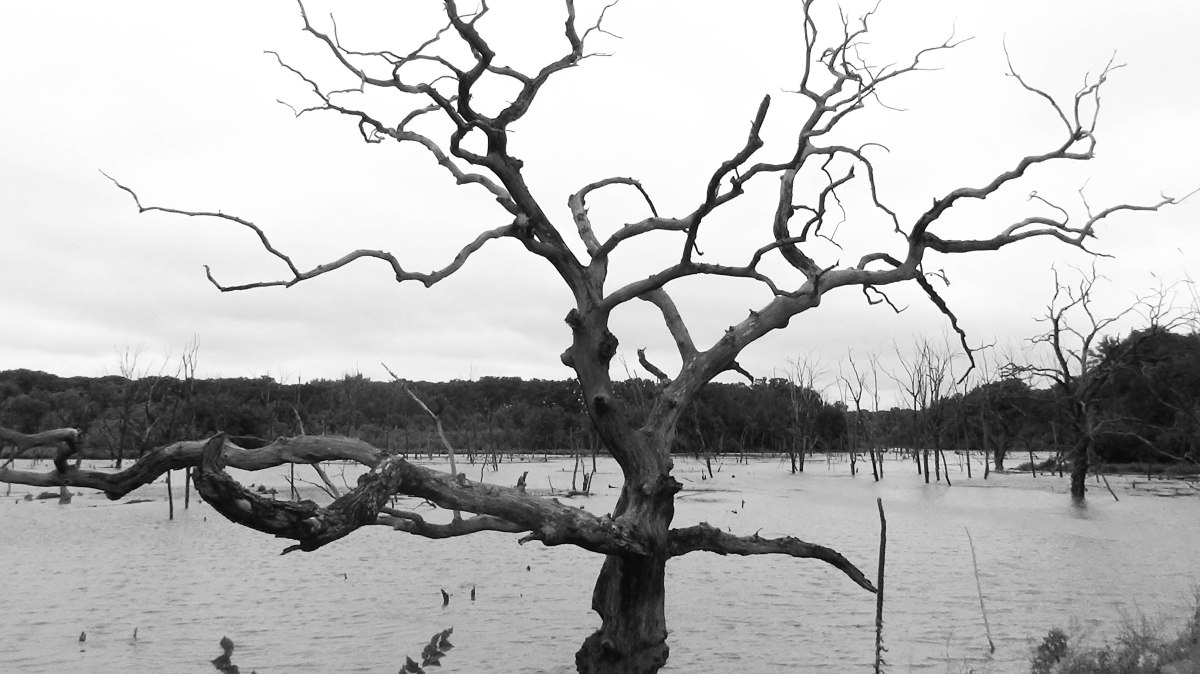 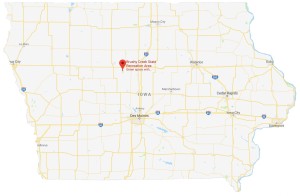 In terms of state green spaces, it is relatively young. Like many places in Iowa, everything about it is man-made. It was once what it’s name suggests, a creek running through a canyon. Then in 1967 the Iowa DNR proposed damming it up and creating the lake. There was nearly 20 years of kickback before it was finally approved. Today Brushy Creek consists of the lake at the northern end of the park, and a large network of equestrian trails to the south. In fact, if you look at the larger trail map of the Lake Trail below, you can see where the original Brushy Creek wound through the canyon that filled up to create the lake.

In total, they have about 45 miles of trails to walk. While I have completed my exploration of the park, I did not do it in one outing.

The focus of this post will be on the turquoise-ish lake loop trail on the north end of the map.

My first trip there was an impromptu trip in August of 2016. The summer was waning and Jessie and I still hadn’t completed our annual “Kill Jessie Hike.” 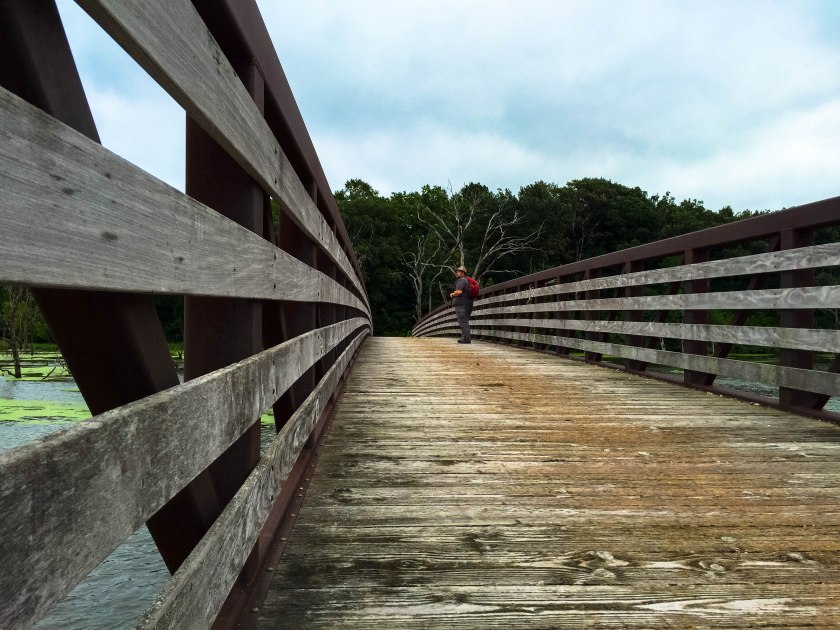 We had planned on heading up north to Volga, but at the last minute Iowa happened and the weather forecast went from sunny, to severe thunderstorms.

I scoured the map, my database, and weather forecasts for a minimum of a 10 mile trail (’cause that’s the rule to try and kill Jessie), we could get to, hike, and get home before supper.

The storm front was moving swift and I found that by the time we would get to Brushy Creek, the storms would have already rolled through the area. So I called Jessie, and we agreed that it was the best option. So we prepped our gear and left before the sun came up. 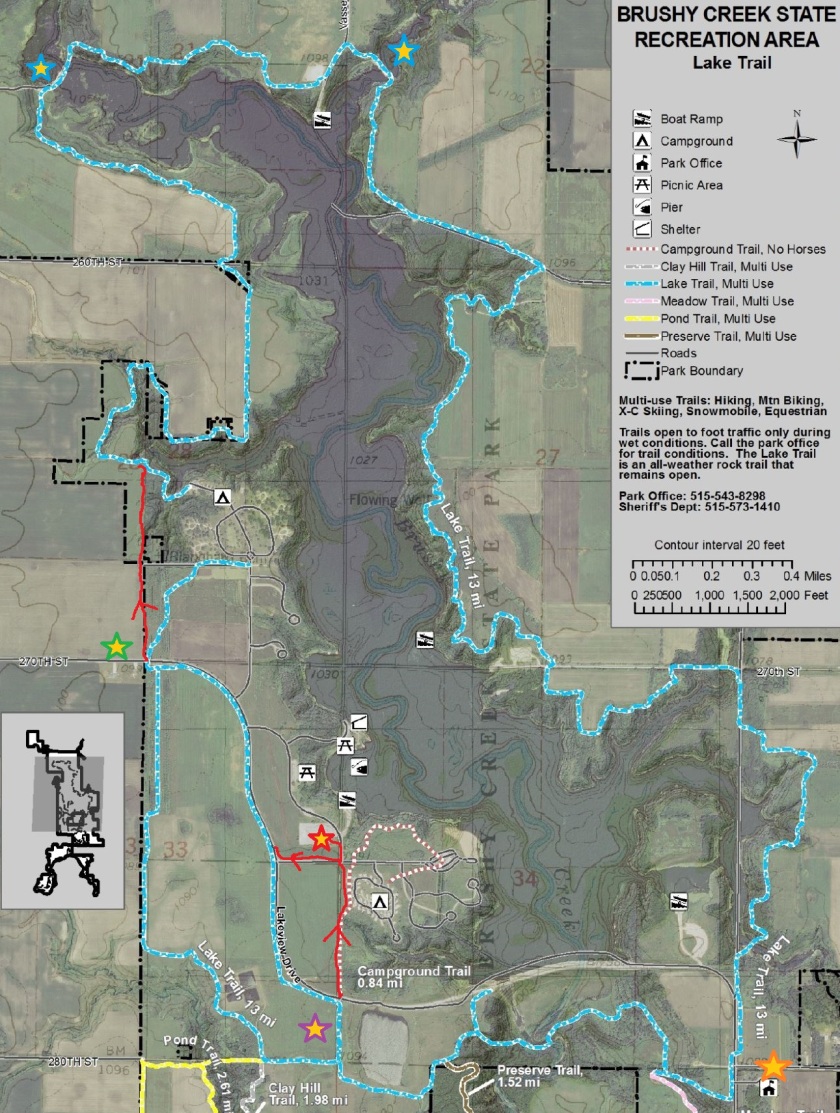 Due to the weather we both opted to leave the cameras at home as they aren’t weather sealed and we didn’t fully trust that our hike was going to stay dry. So photos are limited for this one.

We arrived just after sunrise and parked in the lot near the campground (red star). There wasn’t a whole lot of activity at the park that day, but a few fisherman were out on the lake throughout the hike. All of the other trails were closed due to a pretty wet summer, but the Lake Trail is gravel and was pretty much the only available trail in the state it felt like. 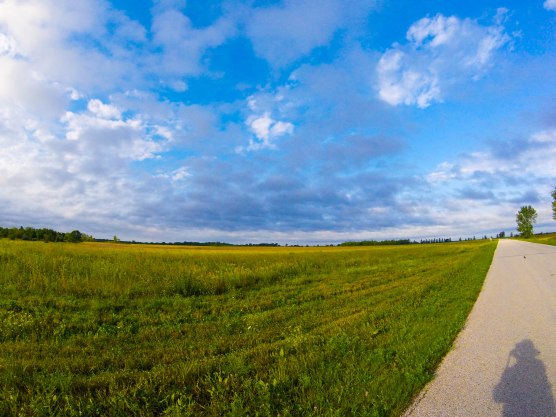 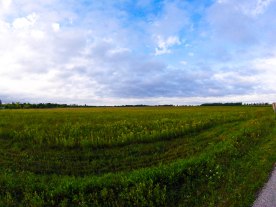 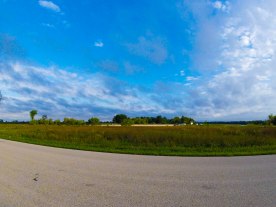 We set off from the parking lot and hiked in a clockwise direction. The trail is mostly open with little tree cover. It skirts either prairie or corn/bean fields along the outer edge of the lake the majority of the time. Now and then it would dip into the trees and give a brief escape from the wind and sun if they happen to be particularly harsh, which we did have some good winds during our trek. 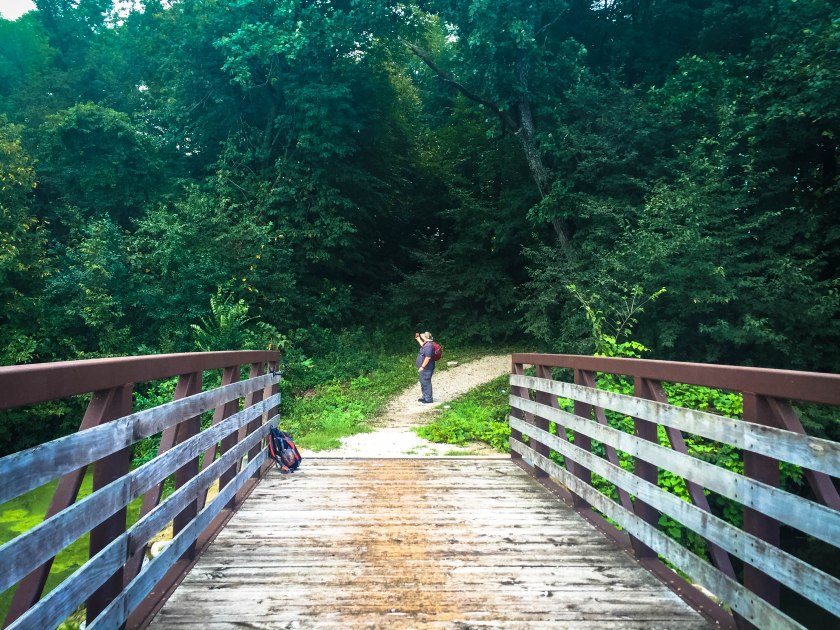 The first note is marked with a green star. Here we found that there was an unmarked path that allowed us to bypass the campground. It was just a farmer’s access road for the most part, but by the amount of road apples, it was a common shortcut.

The biggest treat on the trail for me were the points in which there were bridges that cut across some inlets (blue stars). The old trees that once grew in the canyon are still there, and the surface of the water was completely green with algae at a couple. 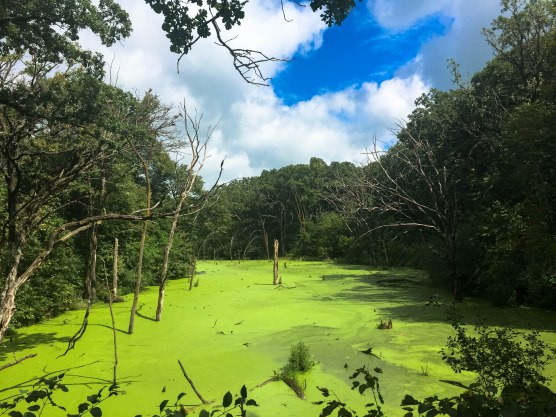 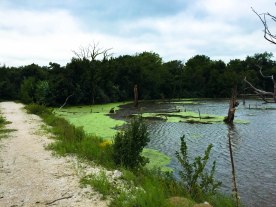 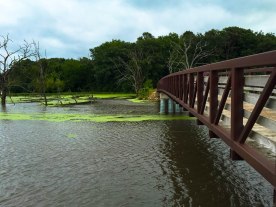 Eventually we did get rained on, but it was only briefly. After that shower passed, the sky opened up and we finally got some great blue skies for the rest of our hike. The trail didn’t claim Jessie, he walked away with some sore feet though. 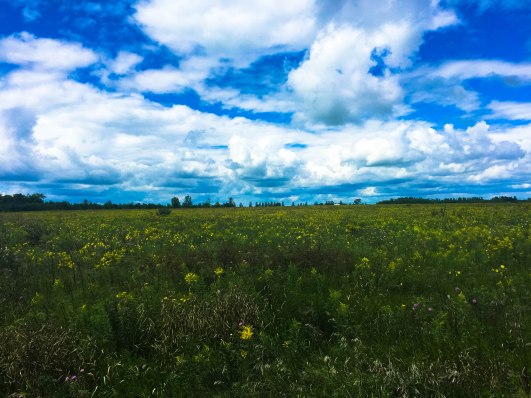 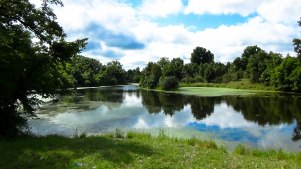 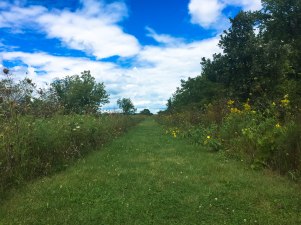 The trail overall was pretty flat and we made good time. Given your confidence with the number of miles you can hike in one session, this trail would definitely be accessible to pretty much anyone. I found that throughout the park the trails are marked pretty well. I found that I never really had to reference the map, other than to just check on our progress.

One thing I found interesting was that the park is one of the designated grow sites for the prairie recovery program in Iowa (orange star). I actually knew nothing about this until I saw some signage and looked it up. From what I understand, they grow native species of prairie flowers and grasses, let them go to seed, and then distribute the seeds across the state to encourage more growth. A nice little surprise to unexpectedly come across.

After a little bit more hiking we came to an open area where it appeared that they may have discontinued trail maintenance on the outermost portion since it appeared to be very overgrown (purple star). We just crossed the road and took the campground trail back to the parking lot. 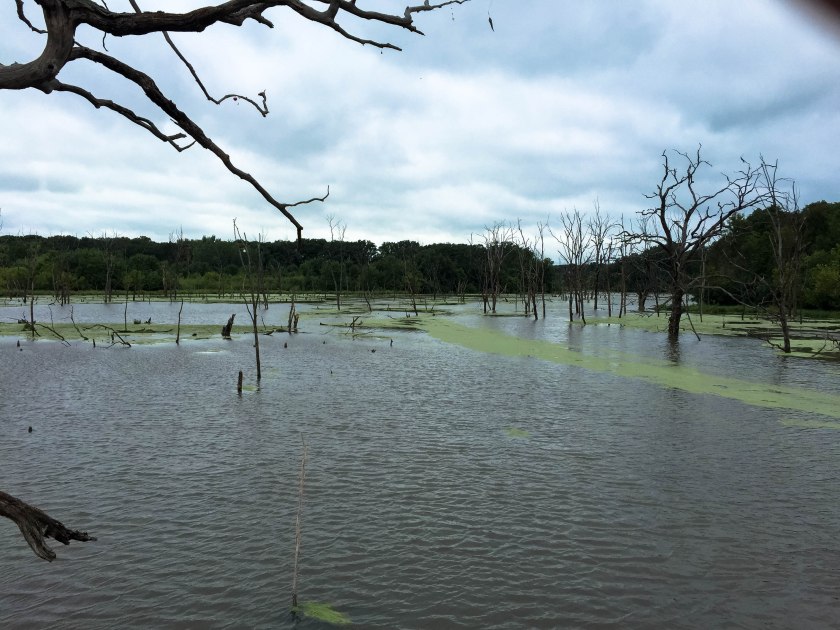 That is the down and dirty of the Lake Trail. I have found that Iowa lake trails tend to be pretty similar. Few overlooks or scenic views, but that doesn’t mean you should skip them. If you are a mileage muncher like me, most tend to give you around 10+ miles. Even though this hike wasn’t jam-packed with scenery, it does have those inlets that I really enjoyed. I’ve been kicking around the idea of getting out on the water in a kayak with my camera for a different perspective. This is one place that would be very interesting to check out from the water. 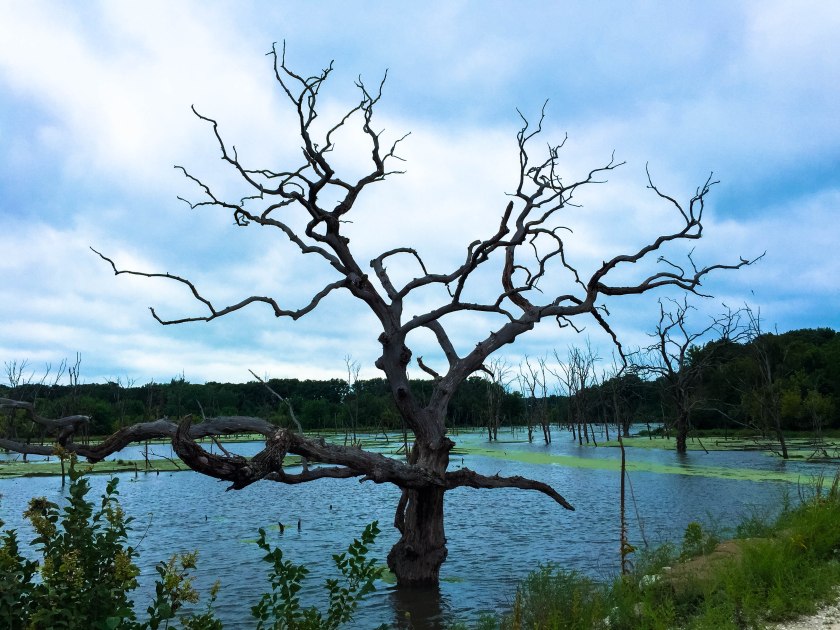 The trail ended up being 12.5 miles and took about 5 hours to finish. So be sure to take plenty of water and some snacks before you decide to tackle the whole loop.

Also, please check out the video over on YouTube as well!

I hope you enjoy your walk!